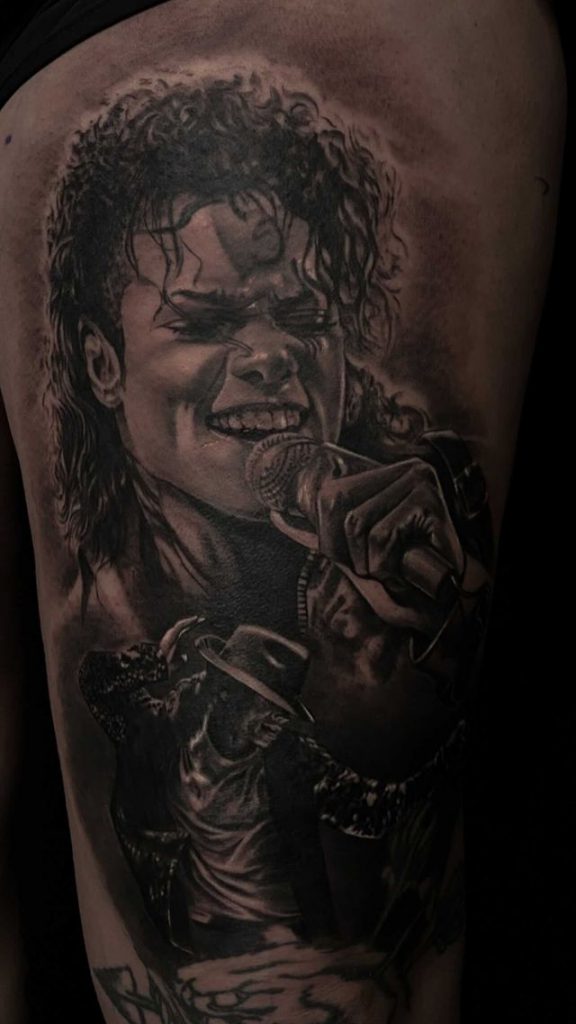 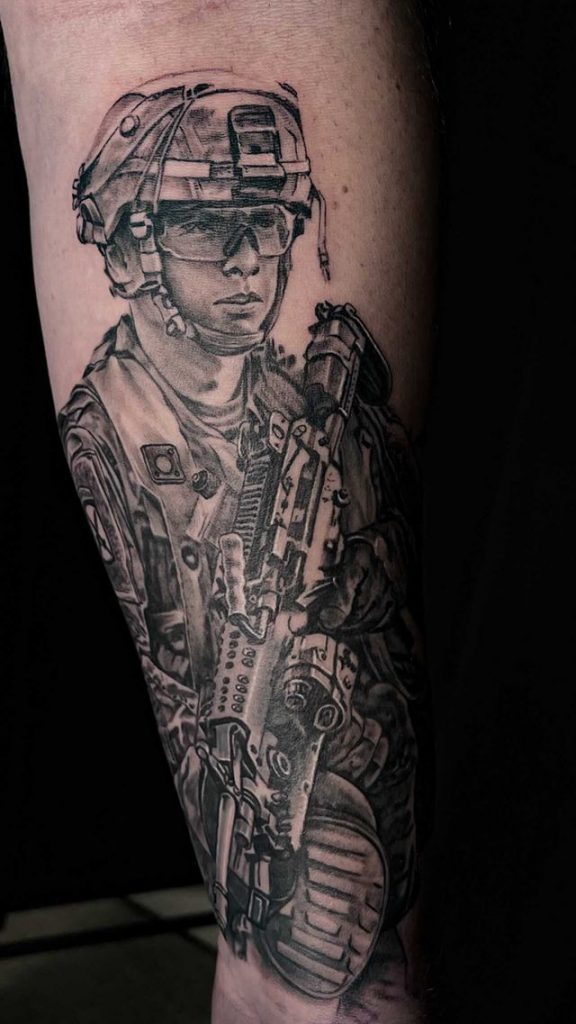 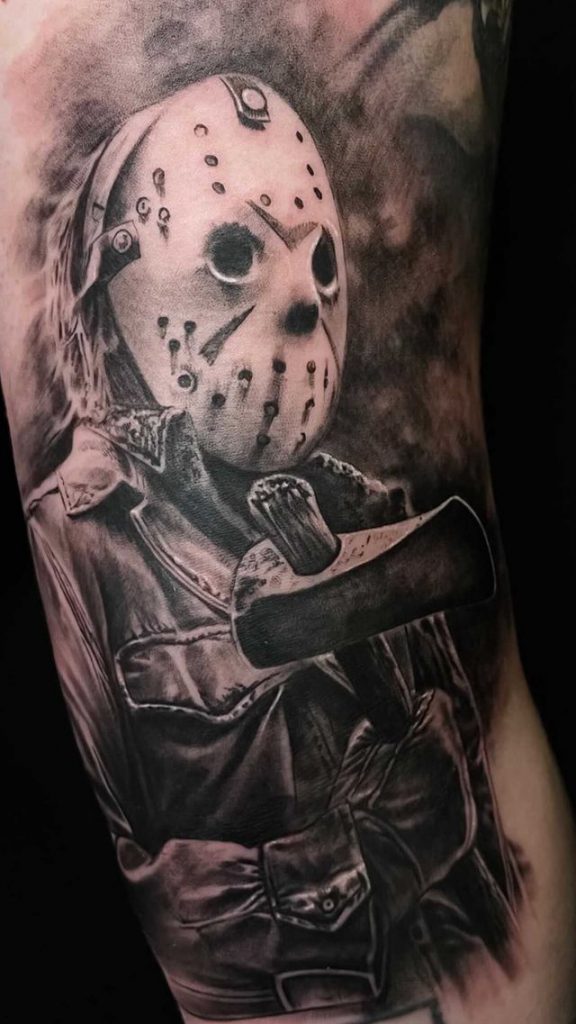 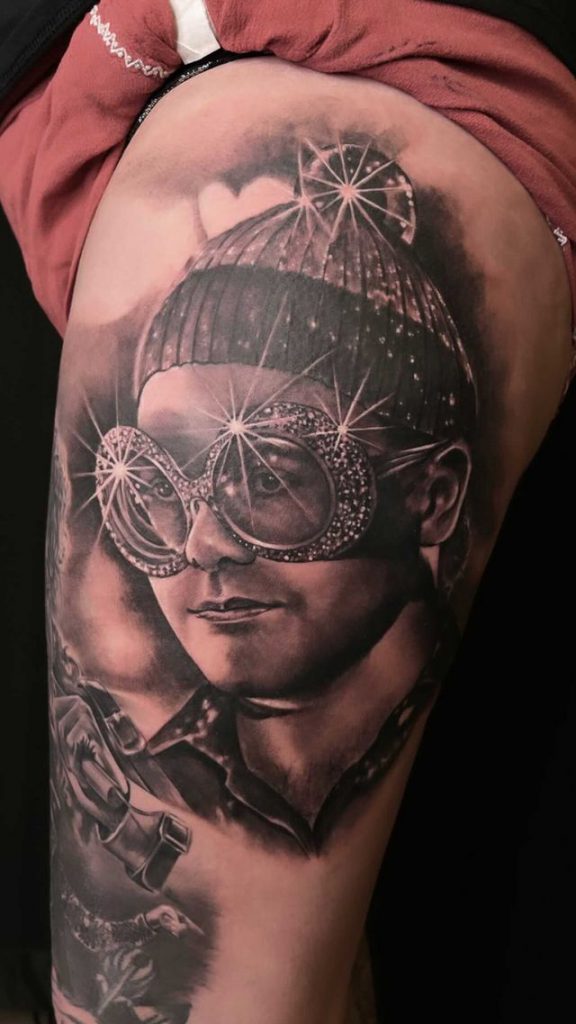 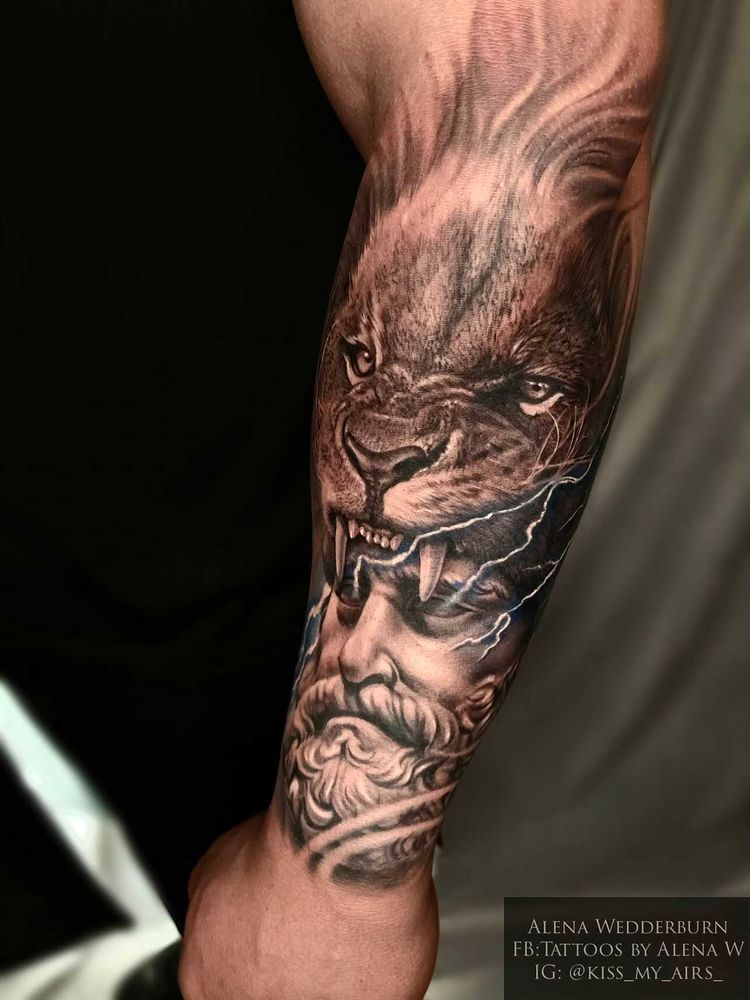 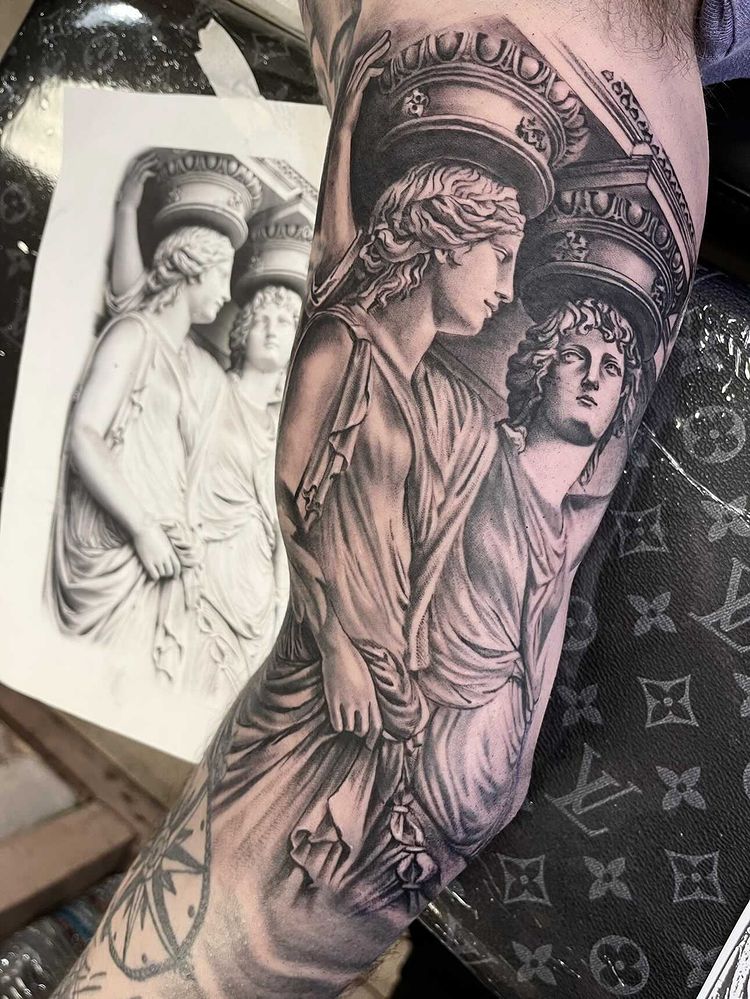 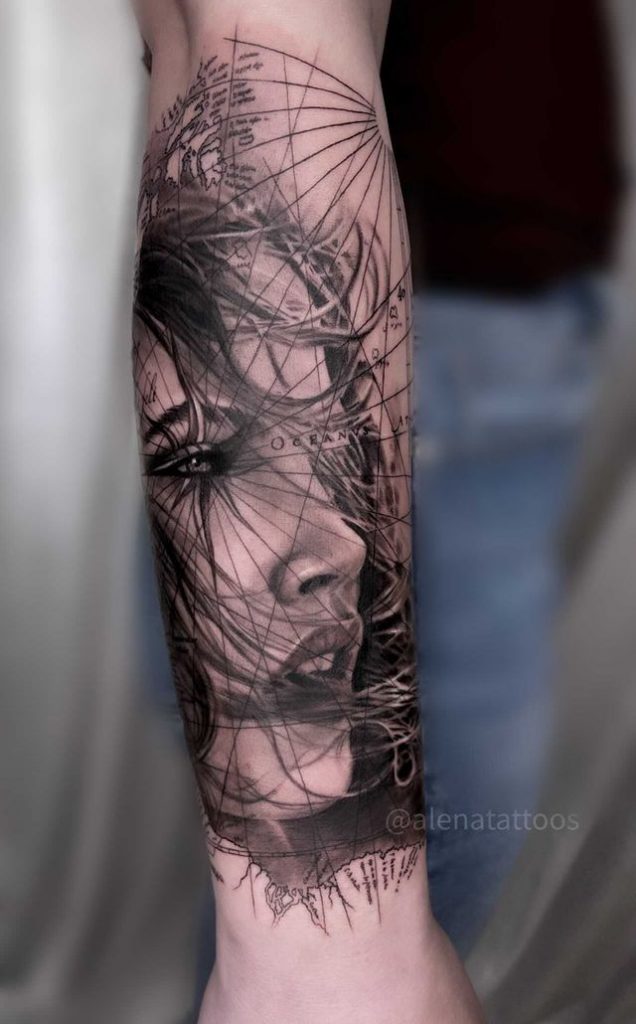 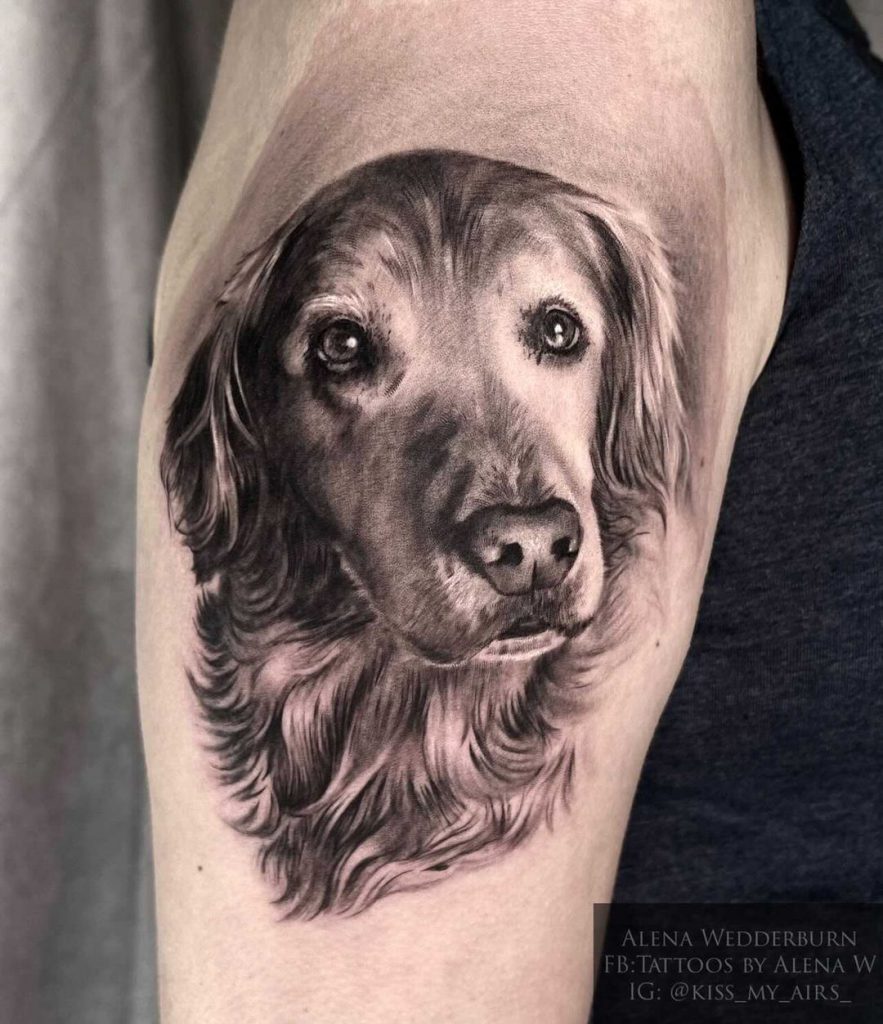 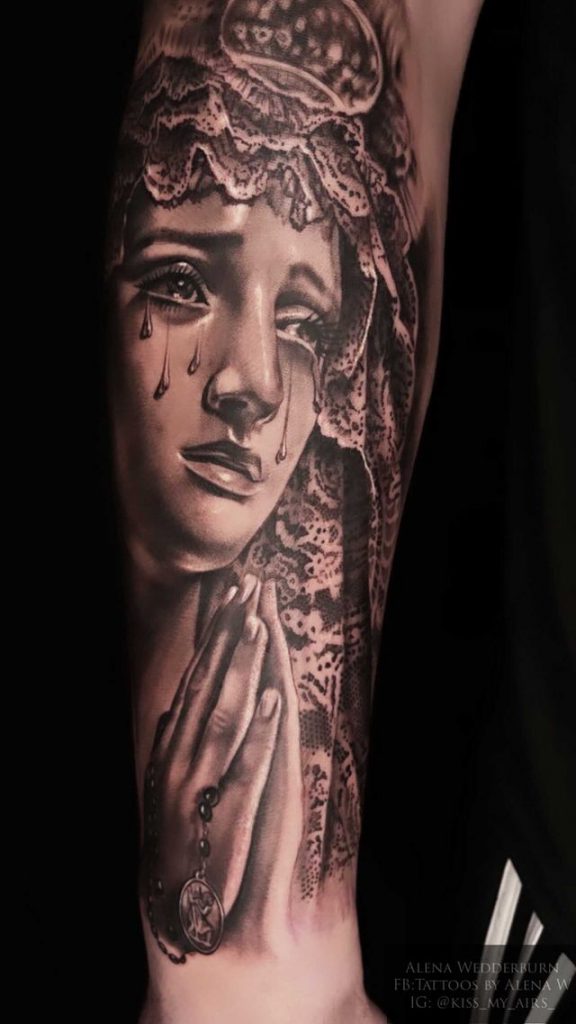 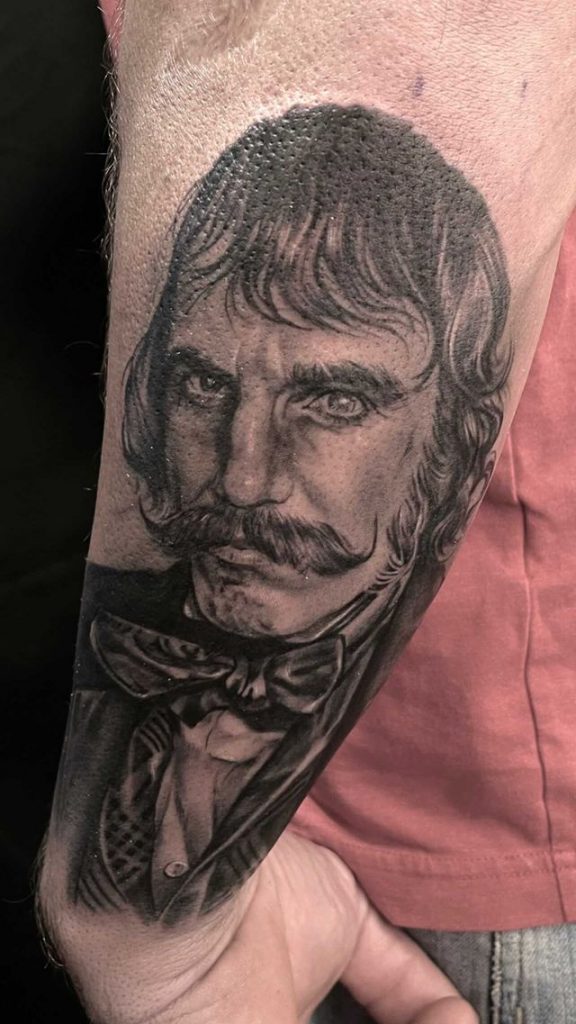 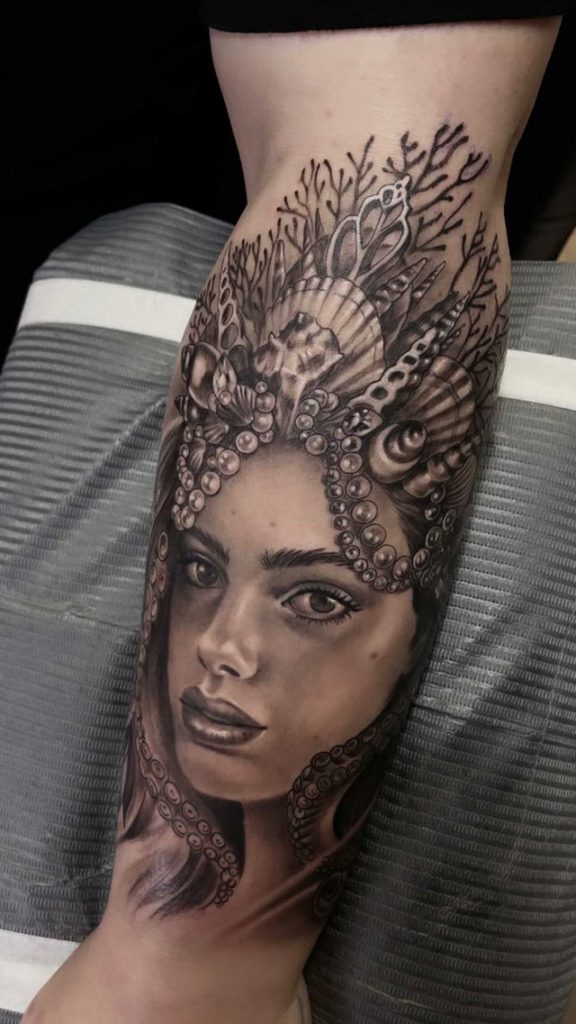 Alena was born and raised, in what some know as the coldest place to ever exist (at least to them) in Yakutia, Russia. She grew up in a tiny village with less than 1,000 people and only 1 road sign. Don’t forget about the fact that they didn’t have any running water!

Since her father had passed away when she was only 8, she and her two siblings were raised alone by their Mother. Fun Fact about her Mom: She used to be a Professional Ski Racer! From a very young age, Alena and her Brother would always follow her with skis on their feet and it instilled a very health-conscious lifestyle for both of them. She likes to think of the gym as her religion. During the Summers, Alena would help out on her Aunt’s farm which is where she also learned that hard work always pays off and she continues to live by this mentality, which explains a lot about her.

Originally, Alena did not have plans to become a Tattoo Artist. She was actually leaning more towards becoming a Doctor (which her Mother pushed for) but, as she says “chemistry was a b*tch for me so it never happened and I changed plans at the last minute.” A few months before she graduated, she started taking architecture classes in a nearby city which is where her talents really started to show. She was always artsy growing up but no one ever really paid attention, as to them, it was always just for fun. Once she started winning awards for her architecture designs, that is when people started to notice and her Mother supported her new dream of being an artist professionally.

This is what led to her going to the Czech Republic and studying sculpture and fine arts. It was the very first time she had ever been on a plane but the school had made a deal with her. If she attended and took the courses in their language, she could attend for free. This is ultimately where her actual tattoo adventure began. Since money was so tight back home for her family and they were unable to provide her with additional funds (outside of making sure she was able to eat) she went to an art supply store in Prague where she was able to obtain everything needed in order to tattoo. She only started doing this in order to make a little bit of extra money for herself so she could afford food, art supplies, etc. She went back to her dorm room, watched a few youtube videos, and tattooed a lemon, a banana, an orange, and some random guy from her dorm all that same day.

That summer, she went back home to her family where she was able to officially become an apprentice at a local shop where she grew up. She was at the shop mornings, afternoons, nights, just watching and learning as much as she possibly could. She paid for this apprenticeship so they knew she was incredibly serious about it. Once the summer was over, she went back to school where she started working on the weekends at a shop in Prague. This allowed her to start making enough money for her to support herself as well as send money home to help her family out.

Let’s face it, she was a kid so she also spent her weekends partying and living her life to the fullest. But it was during one of these weekends where she met the person who would absolutely change her life in every way. She met her husband. Her husband was stationed in Germany (military) and came to Prague for a 4 day weekend during the 4th of July one year. Since he comes from Jamaica (real hot weather) and she comes from Russia (real cold) they immediately recognized each other as their yin and yang. They met, they fell in love, and now they are a family complete with two small children and a pup! After a while, her husband was transferred to Fort Drum which is when Alena started working at Bare Knuckle Tattoo. Since it was so close to the military base, this provided her with a huge clientele that allowed her to grow into the artist she is today.

Fun Fact: Alena learned English by listening to music by artists such as Snoop Dog, 50 Cent, Michael Jackson, and her absolute favorite - Rihanna. She would listen to the music and be curious as to what they were talking about so she would write down the lyrics and translate them.
Also, Rihanna is not just her favorite artist but one of her favorite people. Rihanna played a massive part in her journey and is one of the reasons why Alena loves tattoos so much. She admires her not just for her art but also as a businesswoman. Prior to becoming a tattooer, Alena would recreate some of Rihanna’s outfits by drawing them and then cutting them out for dolls, which Rihanna absolutely loved. Because of this, Alena has been able to form a relationship with her that many people would become jealous of. And believe us when we say, she couldn’t be more grateful.